Ubisoft has rolled out its post-launch content roadmap for Mario + Rabbids Sparks of Hope. Owners of the game’s season pass, whether purchased separately for $29.99 or bundled in the game’s $89.99 Gold Edition, have three big adventures aimed at keeping them glued to the game throughout 2023. 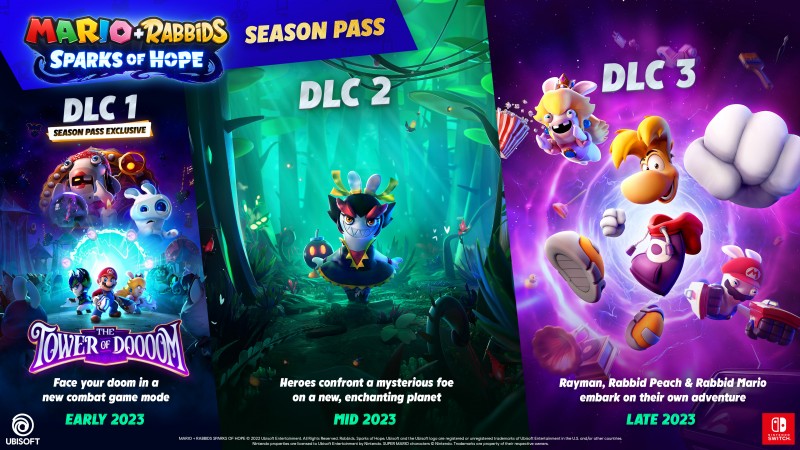 It all kicks off early next year with the first expansion, Tower of Doooom (their spelling, not mine). This introduces a new combat mode where the team must fight their way up Madame Bwahstrella’s multi-story tower to rescue Spawny, the visor-rocking Rabbid from Kingdom Battle. What’s important to note is that Tower of Doooom will be exclusive to the season pass, meaning you’ll be unable to purchase it separately.

The second untitled DLC arrives in mid-2023. So far, we only know it takes players to a new planet, features never-before-seen enemies, allies, and secrets, and stars a new antagonist. Finally, Rayman crashes the party in the final expansion to close out the year. Ubisoft’s limbless hero joins Rabbid Peach and Rabbid Mario on a separate adventure in a new location. Unlike Tower of Doooom, the second and third expansions can be purchased a la carte.

I enjoyed Mario + Rabbids Sparks of Hope quite a bit, awarding it a 9 out of 10. In my review, which you can read here, I wrote that the game “builds upon Kingdom Battle’s foundation with smart tweaks and fun additions to emerge as a better game in every way.”