In the world of comics, X-Men has been a hot property in recent years. While the popularity of Marvel’s mutants has rarely been at risk in the last couple of decades, the current narrative arc, launched with the House of X book in 2019, has injected new life into the characters and stories. That same story has all the makings of a thrilling video game and one that uses a very particular gameplay structure – the roguelike. As if written to use that very conceit, a roguelike X-Men game could capture something intriguing and exciting about the current fiction. And that vision would be at its best if it came from a small team given creative freedom to make the game its own.

For the uninitiated, the Dawn of X storyline helped relaunch the X-Men comics a couple of years back, reinventing some core aspects of the narrative to reinvigorate the mutant family of books. [Notable spoilers follow, in case you’re still hoping to discover it for yourself.] Without getting hung up on the details of an especially complex setup (even by comic standards), the X-Men are in a very different place than they were before. Old enmities, like those between Xavier and Magneto, have been set aside. Most mutants now live together in a mutant nation on the living island of Krakoa. After decades of feeling like underdogs facing constant assault, the tone of the books has shifted, showing a mostly united mutantdom demanding a seat at the international (and even intergalactic) table. Key to this change of fortune is a great secret mutants now hold; thanks to a confluence of powers from several key mutants in their ranks, any mutant can now be resurrected after their death, brought back to fight once again.

And die they do. The X-Men family of books has been filled with dramatic turns where some of our favorite heroes, like Jean Grey, Wolverine, and Nightcrawler, have met grisly ends, only to emerge once more on Krakoa to continue the fight. It makes for some fun scenes since the heroes can make the ultimate sacrifice and then show back up the very next issue. Of course, the miraculous secret of resurrection constantly seems at risk of discovery or corruption. “Oh no! If you die in this other world, you don’t come back right!,” and other related shenanigans help to maintain narrative tension. The power fantasy at play also lends a potent twist to the ongoing themes at the heart of the X-Men mythology, namely, that a minority population often faces violence and even death from an indifferent world. In these latest stories, that painful reality is subverted, giving power and confidence to the heroes.

Gamers hardly need to be sold on the potential for fun inherent to heroes that die and then start the fight back over from the beginning. The roguelike genre has risen in prominence over the last several years, capturing something magical and thrilling that few other games can manage. Fight hard through a seemingly unconquerable sequence of battles, and then die. Use the expertise gleaned during that fight to reach a little further the next time. Gain skill, knowledge, and mastery. “One more run!” becomes the mantra. 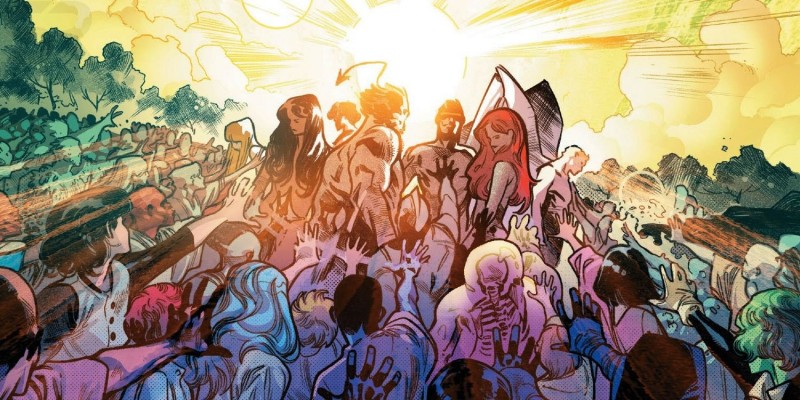 I’d love to see Marvel recognize the potential for the X-Men’s current resurrection-focused stories to translate over into a roguelike game. And to do it justice, they should entrust that effort to the same sort of team that has had the most luck in capturing the intensity and excitement of the roguelike formula – small, independent studios who have already walked these paths with successful games.

Imagine Dead Mage translating its expertise on a game like Children of Morta, and instead having a pixelated action/adventure with characters like Jean Grey and Storm. Or consider Motion Twin’s side-scrolling exploration as seen in Dead Cells, but with Wolverine slashing through a heavily guarded space station orbiting the sun. Mega Crit Games helped popularize the card-based deckbuilding roguelike; it’s not hard to envision its take on Marvel’s mutants, unlocking new characters with each run, and drawing new cards for your deck that reflects mutant powers.

Independent developers are often independent for a good reason; many of those studios are filled with talented individuals who left large studios to pursue their creative visions. They want the freedom to make their own mistakes and triumphs and take risks that a big dev house simply won’t take. Marvel (and other big license holders) should take note of that ethos and consider partnerships that leverage that penchant for risk-taking. Many smaller studios formed specifically to pursue their own passions and projects, and may be justifiably hesitant to veer from their own creative ventures; after all, many went independent to get away from sequels, corporate game development, and in some cases, even the limited control inherent to some licensed work. However, I suspect at least some smaller studios would jump at the opportunity to create something with a big property like the X-Men, especially if the pitch was: “We loved the work you did on your last game. We have this story concept about resurrecting mutants in the X-Men mythology, rising to fight the same hard fight again and again. We’d love to give you the freedom to take that and run with it in your own direction.”

I’ve been impressed with Marvel’s willingness to take chances in recent years, extending opportunities to work on popular franchises like Spider-Man, Guardians of the Galaxy, Midnight Sons (Suns), and The Avengers to a variety of top-tier development houses. We even recently got word of a dedicated Wolverine game from Insomniac. The next step is to open the door to smaller deals with lesser-known development studios, where strong talent and proven success stories could allow for some fantastic games.

I can think of few franchises as ripe for such treatment as the X-Men. Varied superpowers from an array of richly drawn characters, lots of memorable conflicts and villains, and a story setup that lets players experience that live/die/repeat structure that makes roguelikes so fun – it all adds up to a game that fans would love to experience. It’s okay for some licensed games to be smaller, feature pixel art, or take characters in unusual directions that you’d never try in a larger and more expensive project. I’m ready to take Cyclops on that seemingly impossible mission to hunt down Nimrod, only to face his demise, and then be forced to try again, optic blasts at the ready. The concept is ready-made for gaming success, but only if the right partnership can transform the idea into a reality.